What goes around, comes around

Steppenwolf reads Colorless Tsukuru Tazaki and his Years of Pilgrimage by Haruki Murakami whilst tribal drinking at Mo Mo’s, on the Road in Suffolk, doing Hastings and Ig & Ms Moon’s wedding. 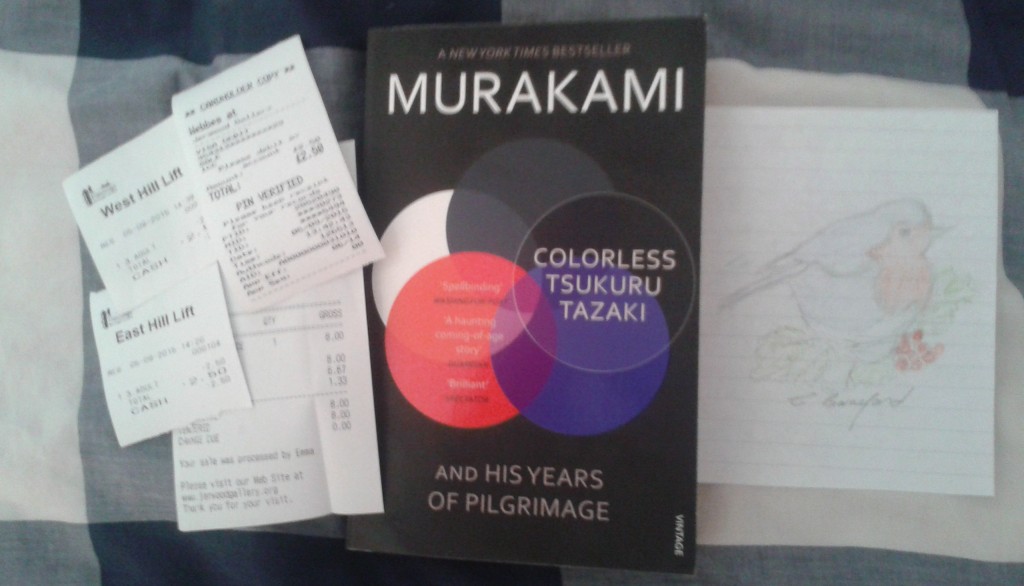 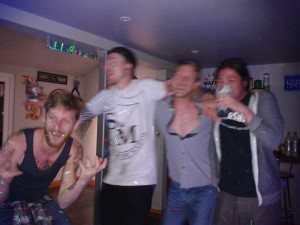 Haruki Murakami should always be read on the road and so it was that I began Colorless Tsukuru Tazaki and his Years of Pilgrimage on the train to Suffolk to visit my relatives. I won’t bore you with the full story of that (just some highlights), but every trip to Suffolk begins with a drinking session at Mo Mo’s and this was no exception. What was exceptional was the truly tribal nature of the drinking session. Kudos to all those involved in one of the best Mo Mo nights I have attended. In other Suffolk news, my mum revealed she had never had a cheese and ham sandwich before and also that she had attended the same art school as me in the early 1940’s!

My trip to Suffolk was over before I knew it with only a small part of Colorless read and so my reading continued over the the following weekend. The following Saturday I knew the day would be good as the coffee began to seap into my brain, a flock of geese flew over my train like a native American sign telling me the way was clear. I had seen the geese from far off and was studying them intently because although they were far off they seemed like really big birds (for a moment I thought ‘the eagles are coming’). As they got closer I realised they were geese and my intense viewing of them led to a nice conversation with the lady next to me on the train. She sold me on the virtues of Polegate (its well situated between Lewes and Eastbourne).

On time I walked from the train station to the wedding venue (Hastings Museum and Art Gallery) only getting slightly lost (always the best kind of lost and standard for Murakami adventures). I didn’t ask a cat where to go because an ambulance man kindly obliged and before I knew it I was fully turned around and heading in the right direction. 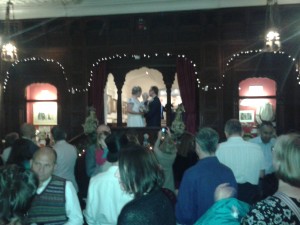 Despite rumours to the contrary I didn’t read Haruki Murakami during the ceremony and duly paid attention to the cute speeches, poems and other guff people spout at weddings, yadda yadda yadda. I took photos to prove I had been there and would have shed a tear if I’d had a spare one. I realised that my life had a new classification I was not aware of, ‘people who come from Brighton’ and a motley crew we were. Frightened by the locals we huddled together for defensive purposes at various stages in the day. A brief note for the gentleman who played clown for the photographs, you’ve got talent and a touch more makeup and you could join a circus. How to get out of Hastings Museum and Art Gallery was pretty tricky (a magic button on the wall opens a door inwards for unsuspecting steppenwolves, not paying attention), its seems once you’re in they’re not that keen to let you go, I won’t hold that against them. 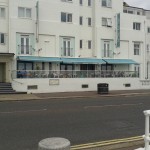 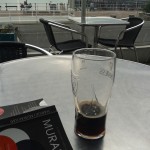 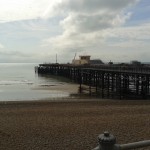 Whilst no one was looking I legged it to the sea front and before I knew it was standing at the end of the pier looking at all the work being done. This seemed like a good time to have a beer and so over the road to The White Rock Hotel. Some good and one bad experience here. The bar maid short changed me (a personal no no for me, always mentioned in reviews), when she gave me the pound she’d short changed me she took it from the staff tips tin where she had put it in the first place! Bit of a give away (management note). On the good side she had been trained to pour a pint of Guinness and that is always appreciated and the Hotel has a nice veranda to sit on and watch the sea and the world go by while you read Haruki. The old man with the dog with the highest collar in the world was a highlight and brought a smile to my face. 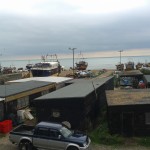 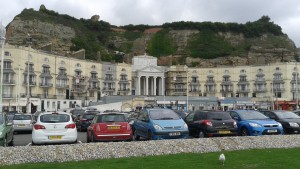 Walking along the sea front I passed the crazy man shouting gobbledygook and having offered this service to Ig the previous day saw what was perhaps my future. The man walking in the opposite direction who said “at least he hasn’t got a care in the world” was right and I replied “its not a bad place to be”. I also passed the intriguing St Mary in the Castle building but did not have time to explore (another time). Then passed the fishing boats before reaching Jerwood gallery. 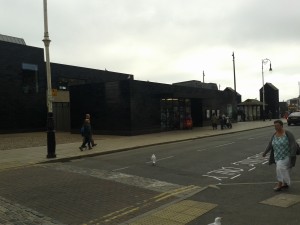 Having reached my next goal, Jerwood gallery, I bought a ticket, £8, its a little too expensive guys and is the reason people are passing by. Nasty moment when I was asked for my postcode and replied by reflex. Why you needed it should have been clearly stated and someone over there should read the data protection act more carefully. Nasty marketing moment to start my visit, stop doing it. Having been directed to the Lowry exhibition I couldn’t find it and ended up back at reception again before someone managed to explain two dark rooms that looked like storage areas were the exhibition. Some signs would have been useful.

Lowry by the sea at Jerwood gallery drew mixed emotions, first the lighting of the exhibition is so dark you can’t actually see the paintings. I know it’s for their own good but if you can’t see the work it’s kinda pointless displaying it. That said the work itself conveyed the loneliness from which he painted it and his skill as an artist is and always has been, underestimated.

There are one or two nice pieces from the collection on display, in particular a nice Maggi Hambling. I took a break in the nice cafe and shared an Apple Juice with a friendly wasp ( he didn’t like being photographed however so I obeyed his wishes) whilst reading Haruki Murakami and being spied upon (you know who you are). Downstairs had some further nice pieces from the collection and if I’d paid £5 to get in I’d have felt I got my moneys worth. Slightly disappointed there was only one Lowry postcard to buy as I had connected with three or four of the paintings and would have liked a postcard to take away. Someone from The Jerwood should visit The De La Warr to learn how to do this kind of gallery. In particular it needs to be free to get to the cafe. 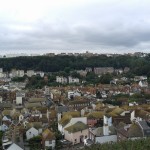 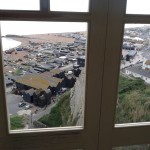 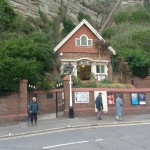 I walked a little further to see the iconic fishing huts before boarding the East Hill Cliff funicular railway. I’ve never ridden on one and since Hastings has two this seemed like the time to dip my toe in the water. The two funicular railways in Hastings are very different with one having a great view and the other climbing into darkness immediately. The East Hill one is the one with the view and as a bonus provided a view at the top, of the back of Ig and Ms Moons house. For this reason I recommend riding it even if you don’t want the nice walk available at the top. 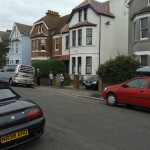 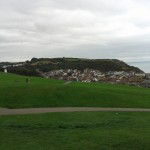 Back down to sea level and its time to start walking to the reception. With some clever navigation I find George Street straight away and pass Hastings Arms where Ig and Andrea first met (seems appropriate). At the other end is the West Hill Cliffe funicular railway, I recommend going up with children aboard as they appreciate the darkness much more than adults. A quick photo of the East Hill and its off to the wedding reception. Another quick picture of the front of the house and I’ve photographed it from both sides! 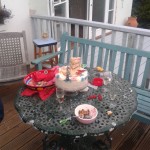 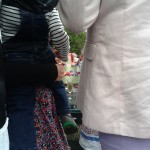 I was forced to sign a wall before being given some Pimms and it looks like I might have to read the data protection act to the Grants/Moons. My complements to the Brighton motley crew who entertained with humour and laughter. There was a moment where it looked like things might turn nasty and certainly some who shall remain nameless did start hoarding cutlery. But the fish and chips showed up just in time and very quickly people were sated. I just caught a glimpse of the cake cutting and after much laughter and chat it was soon time to go home. The train gods were with us and we just made the quick one. We were soon safely back in Brightons arms, unscathed by our sojourn to Hastings.

Meanwhile the grass continues to grow.