Marlene Dumas and the great heist

A lament for Ipswich my retired Dell Dimension 8300 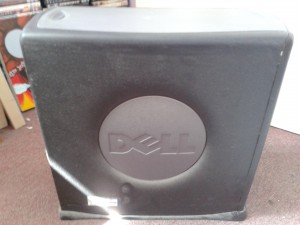 I bought Ipswich approximately ten years ago and everyday I’ve spent in the flat since that time he’s booted up and done his job for me. In the beginning he was the bright, shiny, new thing. A replacement for my previous computer. Close to the top end of the range for the time he was fast, mean and tough! As the years passed, while he was busy working, technology was inexorably catching up with him until, at the end, his operating system was out of date. His battery on the motherboard could hardly power him up in the morning (he took two or three attempts to get going, but never failed). He has far too little RAM for modern tasks, the processor is now slow in comparison etc etc. Time caught up with him.

Ipswich is exceptional because all my other computers died before they were replaced. They inevitably die and I always replace them but Ipswich stood firm, like an old dog he struggled towards the end to get to his feet. But every day he managed it and metaphorically wagged his tail at me saying what’s for today Paul!

Ipswich, the best computer I ever owned has now been ‘retired’, he does still work, I booted him for the last time yesterday, but time has caught up with him and he had to be replaced. Farewell Ipswich, you’ll be much missed.