Why I’ve joined the Green Party

You don’t get to see a 5-0 very often in your life and as an Ipswich fan I’ve been lucky to experience that against the old enemy Norwich, 21st February 1998. So to experience it twice was a joy, a spy in the Brighton camp I am never the less a supporter and of course especially so against Norwich.

The game swung on an early goal at the opposite end to us. An opportunist piece of work from Glenn Murray, stealing the ball from the keeper and slotting it in. I didn’t celebrate the goal because I thought the ref would blow at any moment but he never did and that was that. In a tight first half where Norwich impressed the goal helped settle the Seagulls and their supporters and beer at half time saw a discussion about how good Norwich looked and how we’d do well to hold them today. 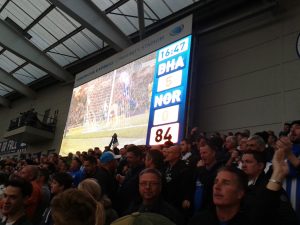 Murrays second got the fans going (it being in front of the North stand) and suddenly Norwich looked shaky at the back and Brighton began to attack them from all sides. Four minutes later Dunk sailed above the defence and bang 3-0. The Norths getting up for this now and even I’m celebrating the goals like its Ipswich (if only). Murray scores the fourth, his hatrick and this is where we crack, furiously jumping around hugging strangers just because its that kind of moment. It feels significant and so we photograph the scoreboard just to say we were there. But that’s not the end and my dream to see five against Norwich again is given to me by the Seagulls. Knockaert scores a wonderful chipped goal right in front of us and we all go wild again, crowd singing lets go fucking mental. We photograph the scoreboard again and the moment is complete. Thank you Seagulls, it was great to see Norwich go down 5-0 for a second time and brought all the memories of 1998 back to life.