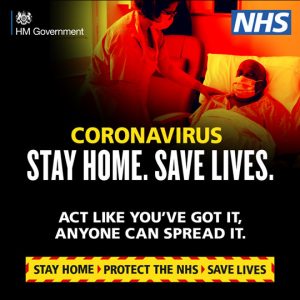 About a week had passed with me holing up in the flat slowly burning through my supplies and the time finally came to step outside again and look for new supplies.

My first trip to Marks and Spencers since this crisis really kicked in and it wasn’t very well organised. No markings on the floor and no protection for staff at the tills. Shopping was as a consequence tricky as people tried to avoid each other stepping this way and that while trying to get out of there as soon as possible. I was surprised at how successful I was and indeed felt rather smug as I had picked up some cheap food that had obviously been over ordered and they were trying to clear. It wasn’t until I got home that I realised I had accidentally missed out a whole row whilst going around trying to avoid people (Its at times like this you realise you have a fixed way of going round a supermarket and when something disturbs that mistakes occur!). Having failed to get some milk and yogurts I realised I was going to have to go out again. That would have to wait for tomorrow.

Since I still hadn’t found any loo paper and was down to my last roll I decided to see if I could get some at the same time as milk and yogurts. Marks and Spencers are my usual food shop but they hadn’t had any loo paper since the crisis started and I didn’t have any expectation they would now so I decided to try shopping at Waitrose instead (despite the likely queue).

When I got to Waitrose there was indeed a queue, one that stretched around the corner and started up the hill to Seven Dials. I tagged on the end and waited. Everyone was obeying social distancing and it was a sunny day so no real stress just patience needed. The queue soon moved and after only fifteen minutes I had reached the door and was next in. The floor had been divided into small areas to ensure social distancing (this was the first time I encountered this). The few days since my last shop had had an affect and Waitrose was much further along the organisation trail than Marks and Spencers had been. Before looking for milk and yogurts I decided to see if there was toilet paper and low and behold there it was, I could have sworn it had a glow all of its own! Not only that but I was able to snag some Kitchen towel and finally some hand soap (can’t get enough of that in a pandemic!). Having snagged some milk and yogurts (ok, I bought some Cadbury cream eggs as well) to go with the loo paper etc I was out of there . Emerging into the light with shopping in hand felt like a relief. As Sartre says ‘Hell is other people’ and in a pandemic this is never more true! Having dragged the shopping home I immediately unpacked it all and having done that a serious hand washing was needed. We’ve all become skilled at washing our hands like surgeons do these days.

Unlike a lot of people at this time there is nothing stopping me from working. I work from home anyway as a web designer and social media manager. However these are not normal times and I find the process of shopping for food somewhat draining so that when I return home I find it hard to concentrate on work for the rest of that day. I’m guessing there’s a degree of adrenalin that goes on while shopping which then drops as you return home. I tinkered with work related things for the rest of the day until I finally gave up.

Around this time the governments propaganda machine began to function and we began to get daily updates on the figures (deaths, infection rates etc). Along with the daily updates adverts began to appear on the TV and across social media. Messages like ‘Act like you’ve got it, anyone can spread it’ began to appear on my Facebook timeline. Its around this time that comparisons with the war began and I start contemplating whether there will be rationing.