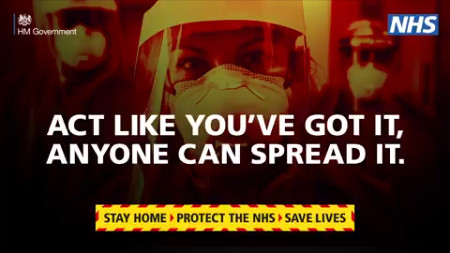 Following my last trip to the pub I awoke and indeed the world had changed. Social isolation began. Since I already worked from home and largely live in social isolation this initially didn’t have much effect on me. I had a few days worth of food and so hunkered down for a while. However, time came when I needed more food (and loo paper, I hadn’t stockpiled like others) and also I needed to pick up a repeat prescription, time to find out how the world outside my flat had changed.

Walking up to Seven Dials in Brighton (my old area) the streets were quiet and people shuffled to the left or right to try and maintain social distancing on the pavement. Reaching the doctors surgery the first change became apparent. The front door was locked and we were instructed to speak to reception through the intercom on the door. I requested my prescription and this was placed in a basket just inside the door and I was buzzed in to enable me to pick it up. Never even saw the receptionist!

Prescription in hand I walked the short walk to Seven Dials itself and my pharmacy. This is where the second change occurred. There was a queue down the street to access the pharmacist. Part of the reason it was down the street was because everyone was observing the social distancing rules and leaving a gap between each other in the queue. I went to the back of the queue and began to wait. Everyone in the queue was quiet and seemingly nervous, everybody obeyed the social distancing rules except for one old lady who didn’t seem to understand how to do it. I resisted the temptation to act as the worlds police and ask her to step back from the woman behind me. Buses passed by us with not a soul on board until eventually one passed with a single passenger, the only bus passenger I saw that day. Police cars patrolled by us, presumably checking out how the queuing was doing (at that time they had no special orders to enforce social distancing). It wasn’t a very fast moving queue and so I had to wait for an hour before reaching the pharmacy door. Once I made it into the pharmacy the reason the queue was slow moving became apparent. The pharmacists is small and social distancing meant that only two staff could work at one time (they would normally have five or six). Only two customers were allowed in at a time, one waiting at the reception the other at the back of the shop. Getting served was relatively quick and suddenly I was outside with tablets in hand. I offered some encouragement to those still queuing and set off for Waitrose to get supplies.

I walked down to Waitrose and was half expecting a large queue to be waiting but as I came down the hill there was no sign of one (might be getting loo paper after all). I turned the corner and there was the queue going the other way along Western Road. After queuing for an hour at the pharmacy I didn’t fancy another long queue and so decided to carry on to Sainsbury’s further along. No queue and I got basic supplies and was in and out in fifteen minutes. No loo paper, kitchen towel or hand sanitiser though.

In to the flat with tablets and food. Instantly double wash hands and settle down on the sofa for a moment. I start to think about my old friend Anne Frank and how I have gained a little more insight into what things were like for her. Nothing like the fear of being hunted down of course, but a little touch of the isolation. I’m not the first to think of Anne in these times and I won’t be the last, her writing very apt for our current circumstance. Thanks for your thoughts Anne.