Day of Culture with Birdy and Jas, including Mark Rothko and Chris Ofili 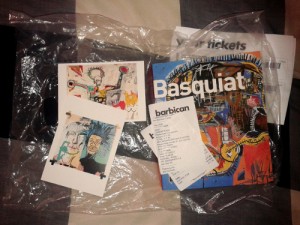 The day started well. The sun came out and so it was a pleasant walk to the Station. Having tried to book my ticket online the day before (an appalling experience that resulted in no ticket) I had concluded the only thing to do would be to go to the ticket office and get a ‘human being’ to resolve the problem. Smart move, very nice man behind the counter, had my ticket in hand moments later. Online booking 0 v 1 Human being. This gave me some extra time to kill and so I settled down in the cafe nearby and enjoyed a chilled twenty minutes with coffee and Pain au chocolat.

Off to London and a couple of hours later I’m at Barbican Tube Station. I’d arranged to meet my companions in a cafe nearby but it was closed so fall back to the Pret a Manger. It served its purpose well and I can recommend the berry smoothie, excellent. The staff were also helpful and friendly so well done to them. 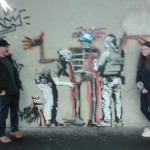 If you’re going to the Barbican I suggest you approach it from the Barbican Tube station, this is because the walk to the Barbican from there affords you an encounter with the Banksy tribute to Basquiat under the tunnel. Nice work Banksy.

Jean-Michel Basquiat at The Barbican. The first thing to say is that this is a big exhibition, don’t underestimate it. Its rare that I need two hours to take in an exhibition these days but this one demands it. Not only is it big but its tough, also, you’re going to have to work to get the best out of it.

Basquiat didn’t live long but the life he lived was filled not only with the social life that probably killed him but also with the culture he surrounded himself with. Art, Art history, Music, Poetry, jazz all apparent in his work. The strongest painting influence is Picasso, he studied him hard and it shows. Compare Picasso’s The Weeping Woman with his portraits to see how well he learned the graphic skill that Picasso brought to painting. The Jazz is all Charlie Parker and some of Basquiat’s work is visual jazz. Its a wonderful exhibition, I won’t try to tell you its easy viewing because it isn’t but is it worth the effort? You bet. Well done to The Barbican for this show which is very well presented and curated. There’s much more to say but go see the show. 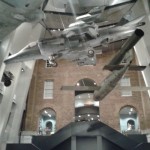 Birdy, Jas and myself then took a large change of gear and travelled to Lambeth North. I had a plan but first there was just time to visit the Imperial War Museum and see the Atrium newly done in 2014. A spectacular site with a Spitfire, V2 rocket and Harrier hanging from the ceiling! And a random tank just for fun. I sense Birdy and Jas may re-visit.

This is our second trip together and the first was blessed despite the bad weather. This second trip had slightly better weather but this next part got the worst of it. A short walk from Lambeth North Tube Station is Westminster Bridge and I wanted to come to Westminster bridge from the Southern side to see Parliament across the river. Big mistake, we got drowned walking there and when we got there Parliament was in total darkness and barely visible in the dark. Of course Big Ben is wrapped in scaffolding too (though we were aware of this in advance) the result being our/my first failure for our little Band of Brothers. Even the walk up to Trafalgar Square past Ten Downing Street was hard work and little fun.

Our relief came in the form of Cafe in the Crypt which despite its somewhat limited menu provided my compadres with some nice hot soup and a roll to bring them back to life. I drained as much energy as I could from a hot chocolate and a little something to eat. Sufficiently revived I revealed my last plan for the day to give my guests the chance to walk away but they showed fight and decided to take up the offer and it was a good call. 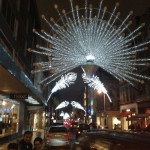 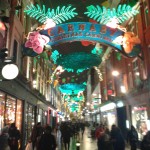 We took a tube to Picadilly Circus and walked up Regent Street to see the Christmas decorations. Turned Right at Beak Street and then left into Carnaby Street which got the Oooh from my companions. Congratulations to the Carnaby Street organisers this display is great and well worth the diversion for. We walked the full length enjoying the display whilst at the same time lamenting the commercialisation of the Street which was once alive and full of interest but is now just a place to shop. Back onto Regent Street we walked up to Oxford Street, taking in the decorations there and then along until we reached New Bond Street which also had a rather good display.

Many thanks to my companions Birdy and Jas, they surrender themselves to my guidance and hopefully it mostly works out for them 🙂 An excellent day.