The day started well, a lazy Saturday morning in bed having breakfast and watching Frankie and Johnny (see my review here http://filmreviews.6fish.co.uk/film-review-frankie-and-johnny-1991/). I hadn’t seen this film for a while and my review from some years ago says it all really.

After a bit of mooching about the flat doing stuff it was time to set off for London. The first thing to notice was that there seemed to be a lot of snogging going on, on the trains, on the tube stations you name it. People celebrating Valentines Day early I guess.

Arrived at The Crypt at Trafalgar Square and settled down to a coffee, only had to wait a short while before my companion for the day arrived and soon after we set off for The National Gallery. I have a policy of trying to hit this gallery each time I go to London but only for short targeted visits (its too big to not target your visit). Its a national treasure and people should take as much advantage of it as they can. My target for this particular day was Canaletto. 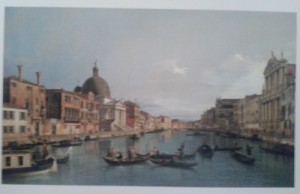 Room 38 of The National Gallery houses one of the great collections of work by Giovanni Antonio Canal (Canaletto). We spent twenty minutes walking around it and they were minutes well spent. Beautiful masterpieces by one of the worlds greatest painters. Most paintings I need to view close up and from a distance but these you need to stand real close and observe the wonderful details. Computer level accuracy of geometry years in advance of the technology. The added bonus for me was wonderful scenes of Venice which I visited many years ago now. Don’t think about it, go see these paintings, trust me.

A tube ride to Camden and we’re walking up Chalk Farm Road. Time for a drink in The Elephants Head and to catch the end of the rugby (England win obviously). A pint of fruity cider and we’re off again, next stop The Roundhouse. 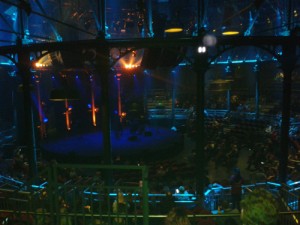 I have to say that The Roundhouse is the most beautiful music venue I’ve visited. Once containing a railway turntable it has been saved from dereliction and turned into a beautiful venue for music. Worth a visit just to see the building alone. We however, had come for Beth Orton.

Beth Orton at such a large venue as The Roundhouse was unusual and I think even she was feeling the pressure. The first couple of songs where some of her more recent experimental work (so I’m told) and I’m not sure they worked that well in this venue the acoustics not helping. However she moved on to more familiar material and you start to feel the Beth Orton wave wash over you. At times during the concert it felt as though I had dived into a pool of Beth Orton and under the water felt completely obsorbed into her sound. Slowly you come up for air and the spell is broken but you get back out and then dive straight back in. She’s not just a pretty face/voice with good lyrics she understands music and that tells as you listen.

Before you know it we’re leaving Chalk Farm underground station and on our way home. A great day as usual Jas, thanks for that mate.