Why I’ve joined the Green Party

This was a trip that nearly didn’t happen. My friend Millie and her son David were due to go but just the day before they realised they were too ill to travel. So in the morning I decided it was still necessary for me to go (seemed a shame to waste the tickets), however I had one last dice to throw and so rang up my friend Ric and suggested he and his girl Erica come along instead. They had a little think and then decided to do it. Hurrah! Its easy to talk existentialism not so easy to do it, so well done Ric and Erica, good decision.

We made our way to London and met at Victoria. We walked down to Tate Britain (drifting slightly off track as I usually do) and before we knew it we were walking around the Paul Nash exhibition.

Paul Nash is someone I’ve been aware of for most of my life and here and there over the years I have seen one or two pieces in exhibitions, museums, galleries etc. But I have never seen a full show of his work until now so this seemed like the moment to step up and take a view on his work.

There are masterpieces from this period including Totes Meer (Dead Sea) 1940-41 and The Menin Road 1919. These show the darkness and destruction of war and in the case of The Menin Road efectively define World War I. Totes Meer (Dead Sea) reflects Nash’s Surrealism influences as it combines World War II machinery with a landscape Nash painted during his none war years. There are some excellent other works that show the reality of war and Nash’s rather unique skill (though I noticed Georgia O’Keefe also does it in a previous show) of painting night scenes adds to the darkness and despair of war.

Before World War I, between the two wars and then after World War II Nash is busy. He paints landscape by default and there are plenty of those. The colour palette contrasting radically with the war palette. He shows influences from De Chirico and Surealism to cubism and for me Braque rather than Picasso. His interests are diverse from stone circles to tree trunks (which he paints badly). There is a noticeably architectural influence throughout his work and this serves him well when he’s expressing himself through surealism. There’s a wink to Van Gogh towards the end of the show to finish off. 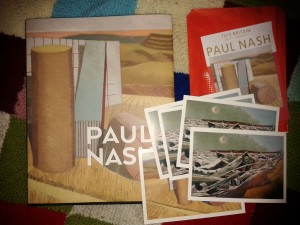 This is a good show, it covers the full range of Paul Nash’s work and gives an excellent feel for what he is about. Some of what he is about is what he’s interested in but his life was bookended by two wars and so some of his work was brought about by circumstance. With Nash the effect seems to have been very noticeable and there is a stark difference between the work he produced during the wars and the work he produced outside of war.

Finally a small mention for Eileen Agar Paul Nash’s partner. There is some of her work in the show and interesting it is too. So look out for her.

Tate Britain rather failed after the show. It clearly wasn’t able to handle two large shows at once (David Hockney is also on) and so the cafe and book shop were swamped. I did the book shop but we skipped the cafe in favour of going anywhere else. 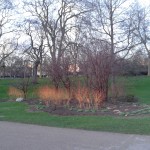 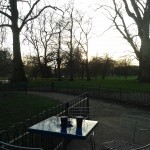 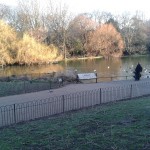 A pleasant if trafficy walk along the Thames brought us to the very imposing Houses of Parliament. We dived inland a little and got ourselves to St. James’s Park as quickly as we could (my friends are not city folk and prefer countryside). This proved a good move as the cafe there was nicely easy to navigate and so before long we had a nice seat over looking the pond with ducks, other birds and even squirrels to entertain. A pleasant walk through the park brought us to Buckingham Palace and a short walk from there found us in Victoria station ready to go home. Because of our useless privatised railway system we were required to stop at Victoria for a couple of hours until we could travel and so made the most of it by having a couple of beers in the pub there which I have drunk in many times over the past thirty five years. After a couple of beers Ric and I were ready to go home but Erica wanted more beer, it took us a while to make her see sense (;-)) and catch the next train home. Very nice day, thanks for that guys. Also thanks to Millie for my ticket!